So I have been away pretty much all the time now due to school and now work with my boyfriend spending nights with me here and there which delays me to update anything. But since I have free time right now I thought I could go ahead and update this now before I lag it even more! =]
To catch up with whatever has been going on with me, I have been pretty busy with school and pretty much not caring with style and what not only because I have such little time to vlog about any of my outfits or makeup. I recently got hired for the coussoulis arena to promote their upcoming show called the Video Games Live where there is going to be a live symphony playing soundtracks to videos with supporting light show and giant screens to display the video game that they're playing. So I've been a busy little bee these past few weeks. 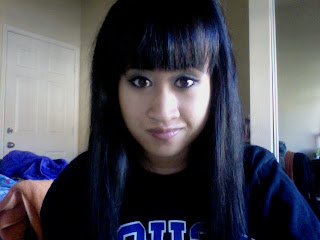 I recently got a new hair cut!! =] i finally had the chance to go chop off some of my dead hair but managed to still keep my length in which I plan on cutting again in a few weeks to get out all my split ends. Then not only that I also got my bangs cut so now they are front straight bangs... although I do like the idea of the change I still manage to sweep my bangs to the side because I am so used to the side bangs and its something my boyfriend hates when I do that haha but yea here is a picture of what my hair looks like now...I know its kind of hard to see because of the black shirt that Im wearing but you get the idea though with the bangs and everything =]

I also received my package from Forever 21 purchasing a long sleeved shirt that feels so comfortable to wear but really light weight and an open cardigan which is amazing to wear as well and a brown embellished ( i guess you can say) belt. I've dressed up and dressed down the clothes I bought and will soon put up an outfit of the day to let you see how I style each time I go to class =] Here is the video of my little haul I recently uploaded. =]
Other than that I have been going out alot with my boyfriend and just recently went to dance held on campus this past friday night and got totally wasted. Lets just say that will be the last time Im ever going to let myself drink that much for I had a really bad hang over all day yesterday haha but it was still fun. I know I didnt get a picture of the outift I wore to the dance but I wore some gray yoga pants with a tight fitting black turtle neck with a elongated beaded necklace I bought from Forever 21 a while and high heels. For make up I was wearing my bright blue eye shadow from mac and basically made it into a smokey eye with nude lips. =]  Got some candy and yea I had a great time.. =]
Well I hope everyone had a safe weekend I know that everyone went out over the weekend for Halloween parties and what not and I just wish that all of you are safe and are being careful =] Have a safe Halloween guys!
<3
Posted by msclassytina at 3:45 PM